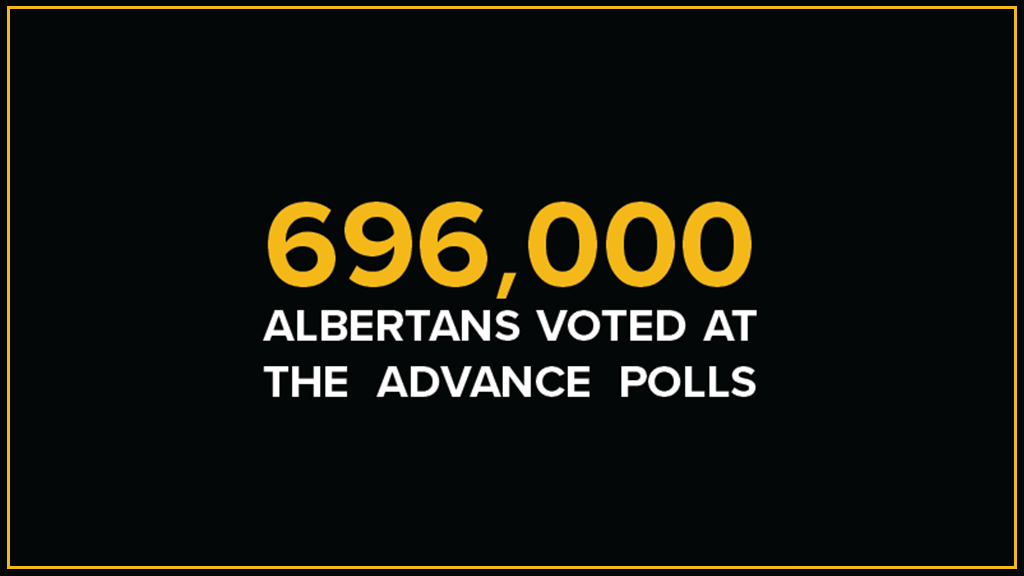 EDMONTON – Elections Alberta today announced unofficial voter turnout numbers for the advance polls that commenced on Tuesday, April 9th and ended on Saturday, April 13th, 2019.  Chief Electoral Officer, Glen Resler stated “The turnout at advance polls was record breaking, with almost triple the number of votes cast at the advance polls than in the 2015 general election.  With over 696,000 ballots cast province wide in five days, my appreciation goes out to all the election officers who worked tirelessly to provide so many accessible and convenient voting options for electors”.

Over the five days of advance poll voting, electors had the ability to cast their ballot at any of the 268 advance poll locations held across the province.  The estimated total of ballots cast during the advance polls is 696,000.

Please reference the attached Backgrounder for a breakdown of the ‘Vote Anywhere’ ballots that will remain to be counted following Election Day.

Tuesday, April 16, 2019 is Election Day.  Voting locations will be open from 9:00 a.m. to 8:00 p.m.  Electors must vote at their assigned location on Election Day.  Voters are reminded to bring their Where-to-Vote cards with them to the polls.  If electors are not registered to vote, identification is required to validate their name and address.

For more information about the provincial general election visit www.elections.ab.ca, call toll free at 1-877-422-VOTE (8683) during normal office hours, join us on Facebook or follow us on Twitter.

Elections Alberta is an independent non-partisan office of the Legislative Assembly responsible for administering provincial elections, by‑elections and referenda.

Number of ‘Vote Anywhere’ Ballots cast by Electoral Division (all ballots to be counted centrally starting on April 17 at 1:00 p.m., and continuing daily until complete).